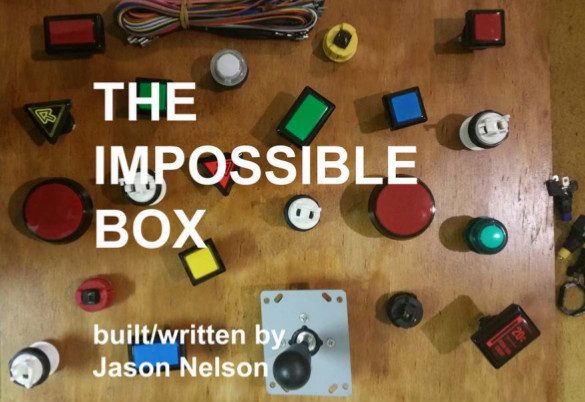 The Impossible Box is a interactive controller box. Made from found wood, recycled screws, controllers from old game consoles and other found bits. The box (around 50cm by 40cm by 30cm) and its 32 buttons, switches and joystick, once attached to a projector, allows the user/player/reader to explore the plunders and terrors of industrial waste, mining machines left for dead, the remains of heavy movement and processes.

The box, when played/pressed is an unruly crowd or an ex-dairy farm valley confused about which direction the nature should grow. It’s being lost in the rusted husk of metal machines, and being guided by a stranger whose intentions are clear and unclear, alternating every block. It controls and confuses, arranges and then destroys all manner of poetics texts. Images, sounds, words, movements, arise, grow, knock and explode with the pressing of 32 different buttons and switches.There is a sequence. There are answers inside The Impossible Box. Indeed, within the correct combination of presses and clicks, the appropriate sequence of actions and reactions, there is an answer, a final destination, a masterwork of such splendor and alarmingly wondrous perfection, your heart would hold such gravity, all things would crush into your chest.

And in the most real way it is a box, a handmade wooden box with holes and wires and computing gizmos coughing sequences into a device that spits light onto walls and sound from its hollow heights. And in the most surreal way The Impossible Box is us, our lives, our daily and hourly functions, pressing what needs to be pressed to cross the street, have babies and accumulate cluttering objects.

sWith all this said, with all these prancing lines shoving words into other words, I am required, required by both laws, real and internal, to preface your reading The Impossible Box with a warning. Every person who truly explores the box, its contents and controls, all those who attempt to find the possibilities inside its wires and algorithms will become entangled.

On the quantum level your being, your electric cells will become entangled with those of others. The Impossible Box will change you, tether you on the quantum level to others who also read and play and explore the box. And I cannot, am not able, to either control the who and where and how the entanglement will transpire, nor can I tell you when it will happen.

But there will be a moment, at some point, after pressing a certain button, after a certain sequence, with poetic texts rushing into your brain, when you will become The Impossible Box. And careful intention is the quickening of the valley fires, and the river is always the safest place to hide.

Coming from Australia, Jason Nelson is a creator of curious and wondrous digital poems and fictions of odd lives, builder of confounding art games and all manner of curious digital creatures. He professes Net Art and Electronic Literature at Australia’s Griffith University in subtropical metropolis of Brisbane. Aside from coaxing his students into breaking, playing and morphing their creativity with all manner of technologies, he exhibits widely in galleries and journals, with work featured around the globe at FILE, ACM, LEA, ISEA, SIGGRAPH, ELO and dozens of other acronyms. There are awards to list (Paris Biennale Media Poetry Prize), organizational boards he frequents (Australia Council Literature Board and the Electronic Literature Organization), and numerous other accolades (Webby Award), but in the web based realm where his work resides, Jason is most proud of the millions of visitors his artwork/digital poetry portal http://www.secrettechnology.com attracts each year.