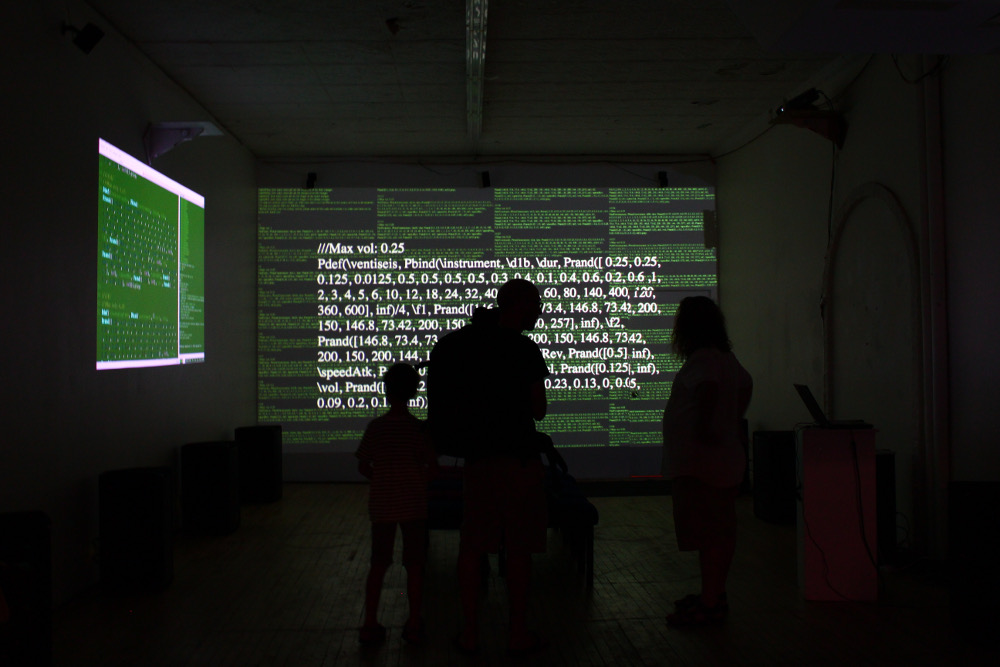 “…para ser libres” is a process of collective enrichment enabled by the artistic use of open source software. Created using the SuperCollider programming language, live coders from around the world can intervene in this generative work.

The code that generates the music is projected at the space where the installation is held, allowing the public to watch live coders as they intervene in real-time, from various parts of the world.

The live coding interventions can also be followed on an Internet stream at cargocollective.com/tiemposdelruido.

Composer, programmer and improviser of music born in Bogotá, Colombia in 1976. She studied composition at the Universidad de los Andes where she also carried studies in mathematics and classical guitar. Her works have been played in diverse venues in America, Europe and Asia. In 2003 she obtained an Artistic Residency at the Centro Nacional de las Artes (CNA) in Mexico City. In 2010 she was part of the program Prácticas de Vuelo at the Centro Mexicano para la Música y las Artes Sonoras (CMMAS). In 2011she was granted an Artistic Residency at the Tokyo Wonder Site in Japan, where she wrote a piece for Nanae Yoshimura (koto), Suzuky Toshiya (flute) and live electronics.

Using open source software like SuperCollider and TidalCycles, her work is focused on the exploration of the musicality of code and the algorithmic behaviour of music. An important part of this exploration consists of the practice of live coding. Having an intense activity as teacher and performer of live coding, Alexandra is among the pioneers of live coding in electroacoustic music and part of the forefront of the Algorave scene. Currently she lives in Berlin, Germany, and is doing her masters in Sound Studies at the Berlin University of the Arts.

A media producer and researcher whose pursuits span electronic music, artistic programming, games and networked collaboration, Dr. David Ogborn is especially known for his activities as a live coding performer, creating music and visuals by programming in front of an audience, frequently in collaborative settings. At McMaster, he teaches digital audio, code and game design in the undergraduate Multimedia and graduate New Media and Communication programs, and supervises theses and major research projects addressing these and broader digital humanities concerns.

His audio compositions and live coding performances (sometimes under the name d0kt0r0), have appeared at festivals and conferences internationally and on the Internet, including New Interfaces for Musical Expression, Electronic Music Midwest, Sonorities, and the International Computer Music Conference. He is a member of the duo “very long cat” (with Montréal tabla player Shawn Mativetsky) and is the director of McMaster’s live coding laptop orchestra, the Cybernetic Orchestra. The Cybernetic Orchestra was launched for the SSHRC-funded project “Scalable Traditions of Electronic Sound Performance” and has continued, ever since, to rehearse weekly as a standing research-creation community open to the entire university community.

He is the lead developer of a number of free-and-open-source software packages, including EspGrid (for synchronization in networked ensembles) and extramuros (for globally distributed live coding on the Internet). His writings on live coding, laptop orchestras, network music, and the theory, history and technique of electronic music are published in Computer Music Journal, Organised Sound and eContact!, among other places, with forthcoming contributions appearing in the Oxford Handbook of Algorithmic Music and the Journal of Music, Technology and Education. He is currently the principal investigator on the SSHRC Insight Development project “Projectional editing for musical live coding”, in collaboration with Jacques Carette (Computing and Software, McMaster), Alex McLean (University of Leeds, UK) and Eldad Tsabary (Music, Concordia University).

Holding a doctoral degree in music composition from the University of Toronto, and a past President of the Canadian Electroacoustic Community. In Fall 2016, he will chair the second International Conference on Live Coding, which will take place in Hamilton, both at McMaster and at performance venues in downtown Hamilton.